Some Kind of Cereus 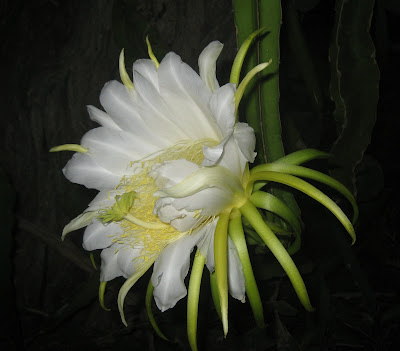 I'm not positive what kind of Cereus this is - but I'm pretty thrilled that it's blooming! Its blossoms measure 8 or more inches across. My father-in-law dug the parent plant from some brush land along the Arroyo Colorado so I can only assume that it's native to the Rio Grande Valley. In their booklet on Cactus, Groundcovers, and Vines, the Native Plant Project describes Acanthorereus pentagonus as an upright five ribbed cactus. I must admit mine only has three ribs and a definite triangularly shaped stem - but I still think this is it. Commonly called Night Blooming Cereus or Barbed Wire Cactus, it blooms at night from June through August. The pistols and stamens are a buttery yellow. 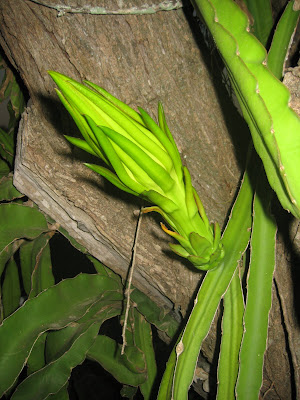 This bud will probably open in a day or two. 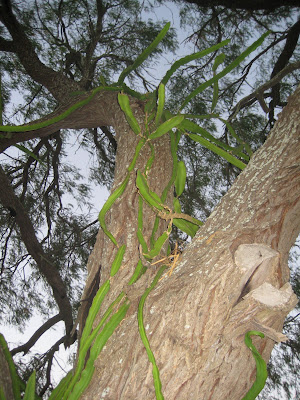 Night Blooming Cereus is a climber. We've planted it in the Rock Garden next to a Mesquite Tree. Since it should only grow to 20 feet, it won't overtake this tree. Until it was recently pruned, its vines had rambled along the the open ground, even putting down roots into some of the porous rocks. 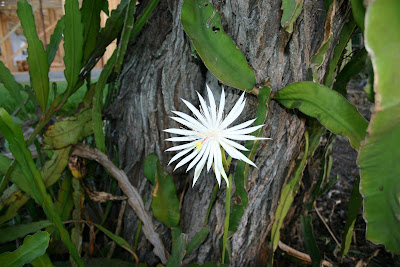 This bloom is from a different night blooming cactus. It is growing intermixed with the larger Cereus. I got this start from my father. Maybe this bed should be called "The Paternal Bed". This Cereus has a flat stem and smaller flowers - but blooms profusely - sometimes I'll count over 20 blossoms on this planting. Too bad they only last one night.
Both of these propogate easily from stem cuttings. You will want to let the cuttings harden a bit before planting. I planted mine directly into the bed.
Posted by Mary Beth at 10:11 AM

I have a night blooming cereus of some kind. It stays inside year round, so usually only blooms once, maybe twice, a year. It's always a big event when it does! It's the one plant I wouldn't want to lose, of all my plants.

What a lovely Cereus! I've never had the opportunity of meeting one. Stopped by to visit and thank you for your comment on our blog regarding Cuban oregano. I probably should have waited like you to give mine a chance to grow. But as soon as it arrived I had to pluck 4 leaves from each 4" pot so I could add them to my meatloaf. Heavenly. I hope you enjoy yours. --Curmudgeon

Carol - How much light does it want? I haven't figured out what spurs a bloom, have you?

Curmudgeon - I made lasagne last week - now I wished I'd used some of the Cuban oregano in it - I know I need to brutally cut my herbs.