Welcome to June's Garden Blogger's Bloom Day in Deep South Texas. This month's theme should be "Only the Strong Survive!" I realize that all of Texas and most of the country are suffering through this month's unseasonably high temperatures. Our plants are no different. As I uploaded this morning's photographs, I thought the blooms are looking a bit tired - this heat sure puts them under added stress too! 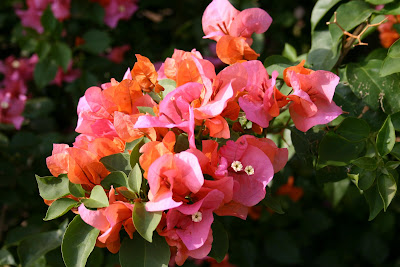 We'll begin with the heat lovin' Bougainvillea in salmon above and red below. 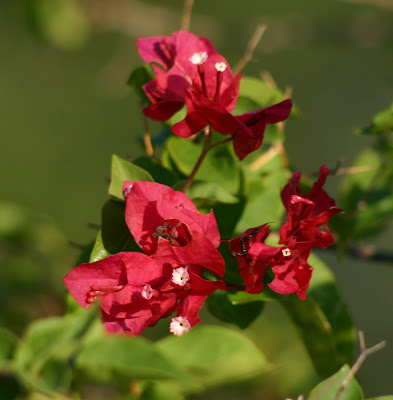 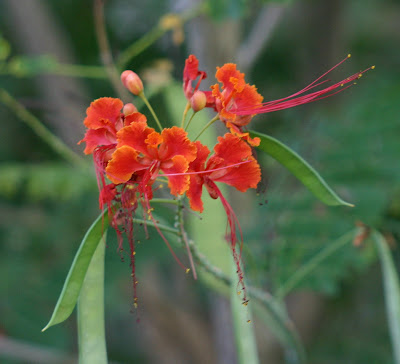 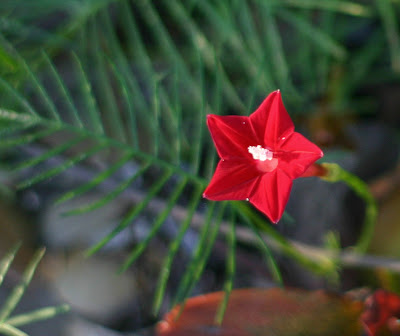 And I really should take a few minutes to find out the name of this vine. I know some of you must know it! It's a self seeder that comes back every summer and decorates the Firebush with its star-shaped flowers. My sister-in-law, Martha and Chris saw it growing in Roundtop, Texas and plucked a few seeds - thus, we just call it the Roundtop Vine. 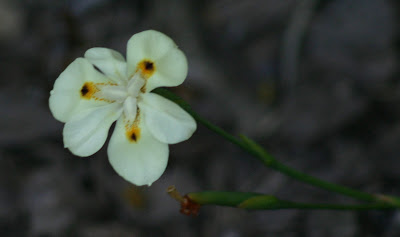 Louisiana Iris will bloom until the first cool snap next fall. One thing I've learned is to separate it every 3 or 4 years. Otherwise, it keeps growing outwardly and you will end up with more of a circle than a round plant. 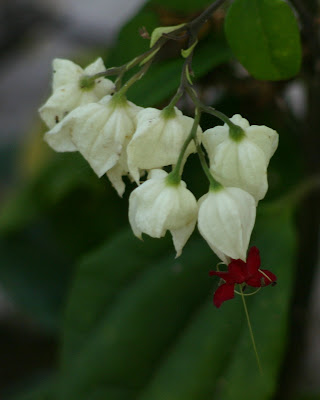 Bleeding Heart Vine Clerodendrum thomasoniae is still blooming - but it sure doesn't look as vibrant as it did a month ago. 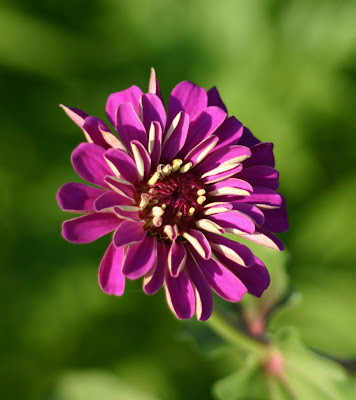 Zinnias are coming into their own in all shades of purple, pink and red. I don't know what happened to the orange and yellow seed! 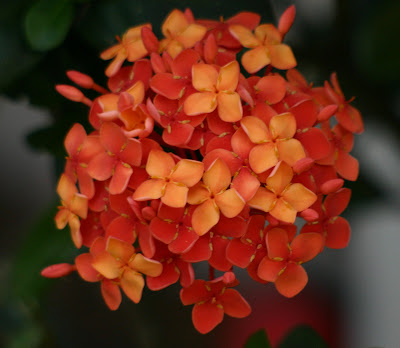 And who doesn't love the orange clusters on Flame of the Woods, Ixora coccinea. There is also a yellow gold variety that I'm looking for a spot for. Lately I've noticed some lovely plantings that have mixed the orange and yellow together. 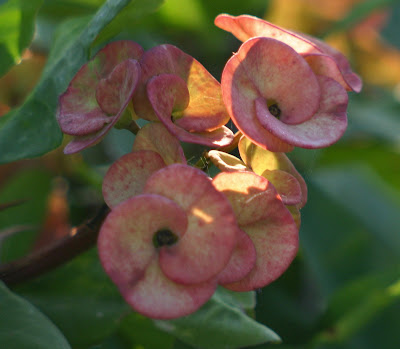 The large flowering Crown of Thorns, Euphorbia splendens var. milii is becoming a bit speckled. It and the miniature variety below are both grown in pots around here. 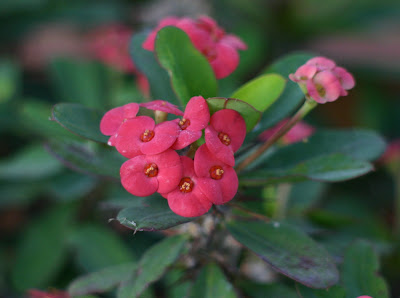 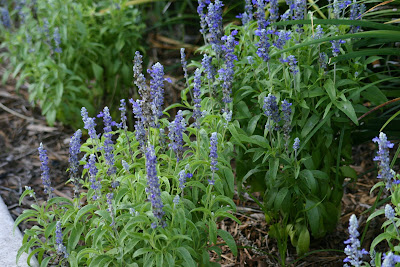 This small bed of Mealycup Sage, Salvia farinacea 'Victoria Blue' has grown and bloomed so well, I added a few more plants to it. I trimmed back the Scarlet Sages, Salvia coccinea 'Lady in Red' and 'Coral Nymph' last week - we'll see what they're doing in July. 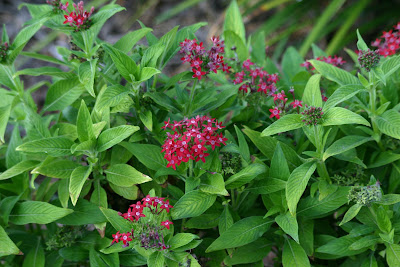 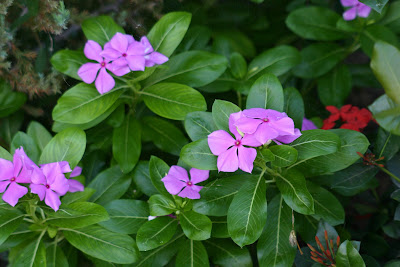 I can't bring myself to pull out the volunteer Periwinkles, Vinca minor. Both the purple and white are staking claim among the Ixora. 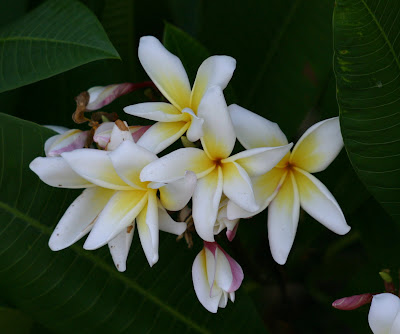 The Frangipani is looking a bit tattered after some high winds last week. 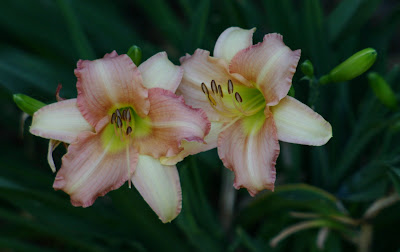 This Daylily, Hemerocallis sp. 'Splendora Sunrise was a Mother's Day gift last year. We had to move them for a construction project - but they don't seem to mind. 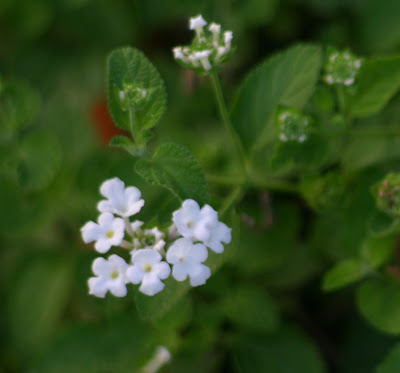 Trailing white lantana, Lantana montevidensis is growing in a pot in a transition bed. I love the how the white shines in the moonlight. 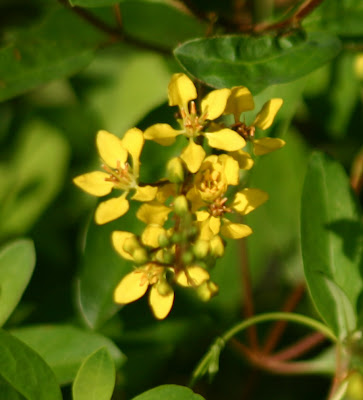 Thyrallis is attracting lots of butterflies and bees. Its bright yellow flowers show up from a distance. 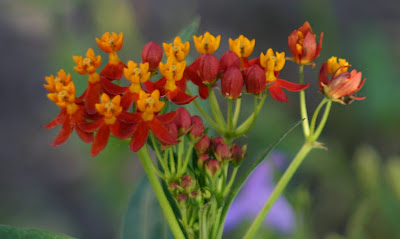 and Butterfly Weed, Asclepias tuberosa has sprouted all over the "Native Beds". She shares the space below native trees with the Frogfruit, pictured below. 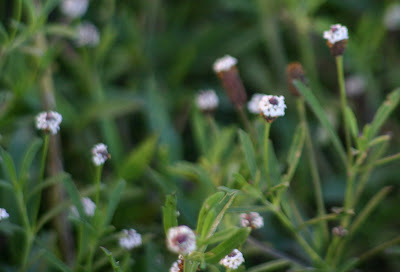 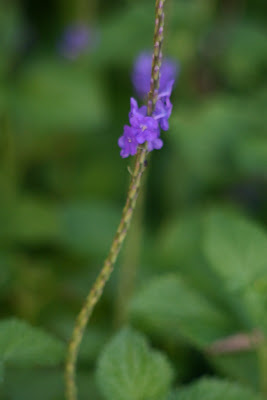 This Porterweed has a great blue color. I need to find a little spot for some of the red variety. 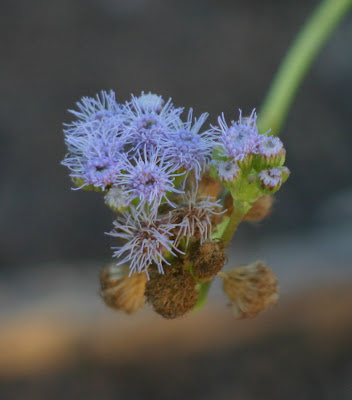 Padre Island Mistflower is also crawling around in the "Native Bed". 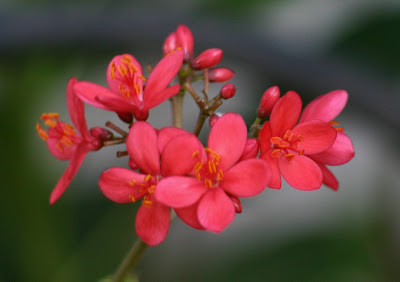 The yellow pistols against the red Jatropha is a pretty combination. 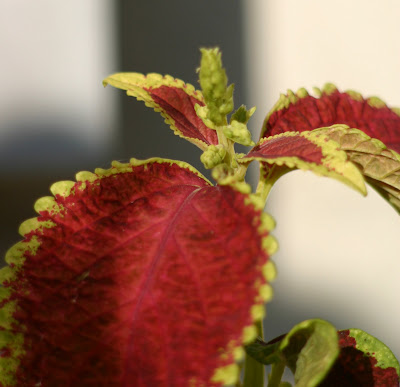 All the Coleus is trying to bloom - but I'm pinching out the bloom stems as soon as I see them. Of course, I think its leaf is a pretty as most blossoms. 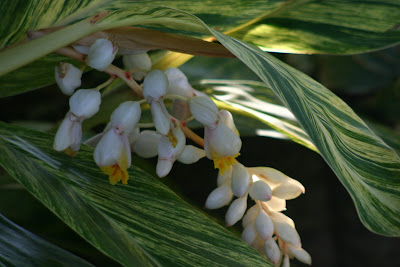 Variegated Shell Ginger is putting on quite a show. Or maybe it's just that I've finally noticed its details after years of ignoring it. Check out the beautiful yellow shell that peeps out of the white pod. 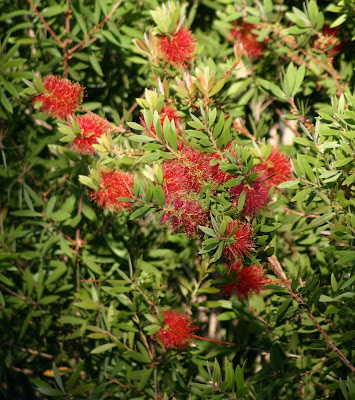 There are some re-bloom patches in the Bottlebrush hedge. 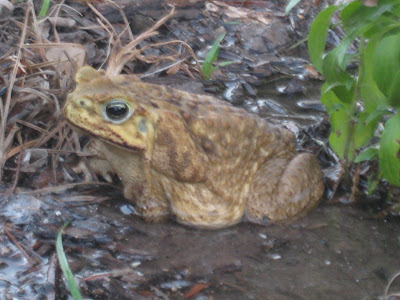 Pam from Digging has her gecko - but I have my own garden mascot. This large one-legged frog. Sometimes I can catch her early in the morning before the sun has warmed things up - or my dog, Red, has had a chance to chase her off. She is amazingly fast.
To see what's blooming in gardens around the world, visit Carol at May Dreams Gardens.

You have some truly strong plants in your neck of the woods! That vine is called Cypress vine. It is a great little self seeder and so bright in the garden. Love your mascot.

Mary Beth, while I don't wish for the heat of Texas, I am wishing for some of those flowers! You really have quite a variety. And I can't tell that the heat is getting to them. We've had rain-rain- and more rain here and the temps have been exceptionally high for this time of the year. So a lot of our plants have really done well. Enjoyed visiting and thank you for sharing your garden.

Wonderful blooms. Got to love the plants that do well in heat. So far my blooms have been looking alright but I have a roof over head to shield them. I second that the vine is a cypress vine.

And a third chimes in for the cypress vine.

Your blooms still look good despite the heat and drought. I overlooked shell ginger for years too, but I'm coming to appreciate it lately. And I like thryallis too.

Cute toad! Hope he's catching lots of bugs for you.

You have some wonderful blooms despite the heat. Gotta love the bougainvillea. I have discovered rose and white blooming cypress vine this year. The white has not bloomed yet but am looking forward to it.

What a wonderful ‘hot' selection of blooms. I can almost feel the heat through the colours. However it was the cooler looking variegated Shell Ginger that really caught my eye tonight :-D

I have a feeling most of your plants wouldn’t survive in the cooler June temps here in Scotland at the moment :-D

Enjoy the rest of your week :-D

All those colorful flowers do seem like a compensation for the heat, Mary Beth - and it's almost a shock to see daylilies and plumeria AKA frangipani blooming at the same time!

You've mentioned that the frangipani grows outside in a flower bed - can you do that with all the plants in this post? Do you have to bring any of them inside for cold protection? (My frangipani live in a garage over winter and come out in April.)

Annie at the Transplantable Rose

I love seeing blooms so different from what I have in my garden. My zinnias are still six inch tall seedlings!

Thanks for joining in for bloom day.

I'm so glad to have found your blog Mary Beth. Your blooms are mostly "exotic" to me (here in Colorado) but nonetheless gorgeous. It seems you've figured out what to plant to beat the heat!

Wow, your garden could be my garden-we have the identical plants! I love also love my cypress vine.