Doesn't the word "debris" sound so much nicer than "garbage"? No matter what you call it, the amount of debris, garbage, trash, or crap laying around after a storm can be mind-boggling. And sometimes through no fault of their own, it takes months for our towns and counties to pick up the trash stacked on the side of the roads. A friend came up with a novel use for the boards from his fence that blew down in Hurrican Dolly - a compost bin! He said when he was looking at homemade bins online, the wood looked like the boards stacked in his alley. Walt turned his into a nifty 4 foot compost bin! 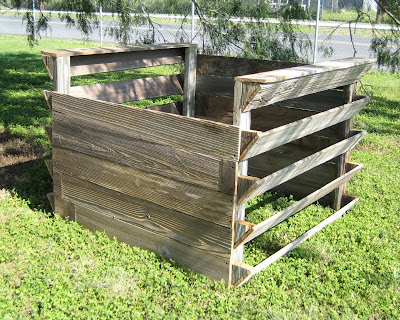 Walt had already constructed the two sides with the slatted boards. It's pretty nifty how the angled boards keep your compost ingredients in the bin while allowing for some ventilation. If you are inexperienced with carpentry like I am, you can always make all four sides solid. Just drill a few holes in the boards. Walt connected his two pre-constructed sides with 4' fence boards. Not only did he end up with a compost bin that would look great in any yard, he kept these wooden boards out of the landfill! 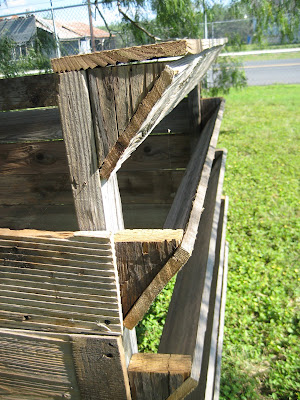 Here's a close-up view of the sides. Just cut triangular pieces to set the slats an an angle.
And don't worry if your fence didn't blow down. I'll be you have a neighbor who would love for you to haul off their old boards.
I just love this: Recycling kitchen and yard waste in a container made from yard waste!
Posted by Mary Beth at 4:19 PM

Email ThisBlogThis!Share to TwitterShare to FacebookShare to Pinterest
Labels: compost

What a great way to recycle. I think his compost bins are great, especially the slanted sides. Very clever.

Nice design and reuse of cedar. It makes me want to get my compost up off the ground and into some stylish bins. Piles of fence boards are still to be had here in Houston.

AUNT DEBBI, BONNIE, & JAN,
I was also impressed with the creative use of old fence boards. A wonderful addition to the Master Gardeners Compost Demonstration Site!

MUDDY MARY,
I am working on some "construction plans" for the compost bin. It will be available in the form of a PDF file on www.cameroncountymastergardeners.org