This turned out to be a keeper!

When we bought our lot in 1999, this tree was already mature but not much to look at.   It was sandwiched in beneath a rotting cottonwood tree and way too many ashe trees.    It really had nowhere to spread its branches so I would guess it had less than 1/2 the width it does today.     We slowly removed the older and decaying trees, one by one.    As the neighboring trees were taken down, this American Elm, flourished.   Her color became darker and her leaves became larger.  I guess she wasn't getting the nutrients she needed.    Her canopy has completely filled in where three other trees used to be.   I'm so thankful that Dutch elm disease didn't claim this beauty. 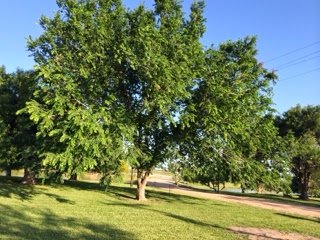 Email ThisBlogThis!Share to TwitterShare to FacebookShare to Pinterest
Labels: Trees.