Nothing has improved my cooking more than using homemade bonebroth in my recipes.   I started making this a couple of winters ago because it was supposed to be good for me . . .  and because it was so warm and yummy to sip a cup of it on a cold winter evening!   I was a little slow to click in to what that rich flavor could add to my recipes.    I like to make mine in a crockpot and cook it for 24 hours or more.   The actual recipe varies from time to time, depending on what I happen to have in the refrigerator.   Here is my basic recipe: 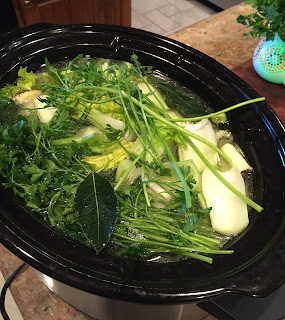 Start with the bones from a roasted chicken - or if it's Thanksgiving week, the bones from your Thanksgiving turkey.   I try to buy chickens that are labeled hormone and antibiotic-free but I am not above buying a grilled or roasted chicken at the grocery store and then using those bones.   Add celery stalks (or the ends of celery stalks and use the celery in your dishes), 1/2 to 1 onion (quartered), two or three carrots, a bunch of parsley, and a couple of bay leaves.   Toss in some whole peppercorns and cover with water.   I use filtered water.   Now turn your crockpot on and set the timer for 24 hours.   I've read it takes this long for the marrow from the bones to leach into your broth.

The first winter that I made bonebroth, I did it on the stovetop.  I had to constantly add water to the pot and was afraid to keep the burner on over night.   I cook with gas and running the burners for 24 hours to make broth ran through LOTS of propane - and turned out to be very expensive broth!   That's when I switched to the crockpot and I love this process.   It cooks slowly enough (even on the high setting) that I don't have to add extra water.  This gives me a nice, richly colored broth. 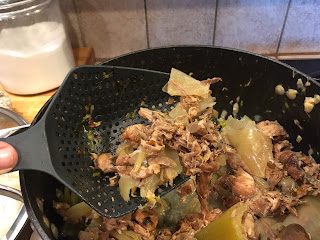 This is what the chicken and veggies look like after a day of simmering.    Remove them from the crockpot with a big straining spoon.    You won't be able to get ALL of the solids - at least I am not patient enough to get all of the solids out during this step.   At this point, I may add some more spices.   It really depends on what my plan for the broth is.  If I'm cooking with it, I don't bother with more spices.  But if the broth is for sipping, it probably needs some salt and pepper - and a little tumeric or cumin can be tasty too. 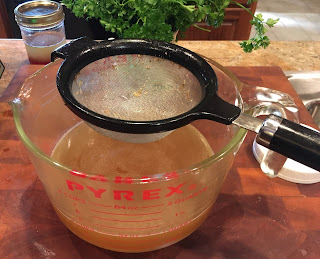 Let the broth cool for 30 minutes or so and then it's time to strain it.   My system is above.    Look at that color!   I made this with a couple of turkey necks and a part of a chicken carcass.    I only had part of a chicken carcass because still haven't trained all my family (i.e. my husband) not to through away chicken bones that are in the refrigerator . . . . 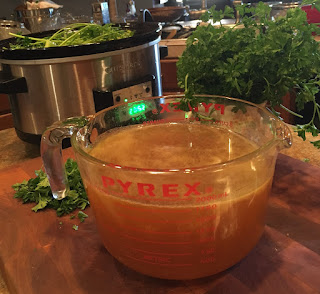 I know you saw the broth in the last picture, but it was so pretty I thought I'd show you another picture of it! 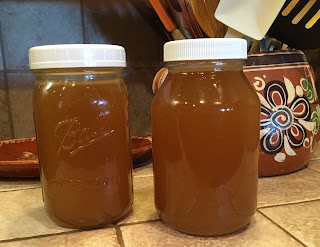 The final step is to put it into jars.   It usually makes about four quarts.   I just drink what doesn't fit into the jars.   It will stay fresh in the refrigerator for 1 week or in the freezer for 3-6 months.    You can freeze it flat in plastic ziplock bags or in a jar.   For the freezing, I like the bags but for the defrosting and using, I like the jars.    If you freeze in a jar, freeze it first without the lid, leaving room for expansion.   After being frozen for a day, you can cap the jars.   Otherwise, you are risking some broken jars.

Here's a printable version of my recipe.

If you haven't tried bone broth, I hope  you will.   It's super easy, super tasty, and super good for you!
Posted by Mary Beth at 10:37 PM