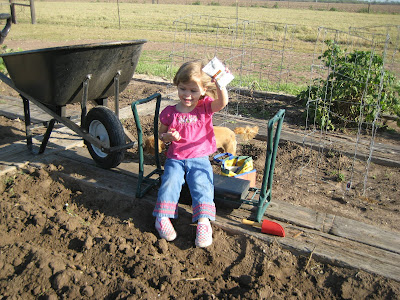 Late February through early March is time to plant a summer vegetable garden in the deep south Texas. We have a few carry-overs in our garden - like the tomatoes that went in last October. In spite of the neglect they received, there are some plum-sized fruits on a couple of plants. Asparagus is being harvested every other day - and hopefully we'll continue this for a couple of months. The asparagus roots were planted in March of 2006. Maintenance consists of spreading an inch or so of compost over the bed each spring, keeping the bed free of weeds, and watering. 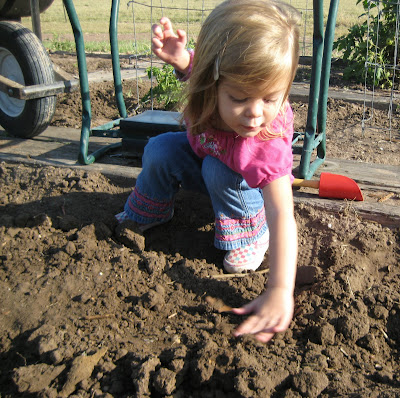 My little assistant took over this year's planting. Here are Kentucky Wonder pole beans - after she puts the seed in she gives the dirt a nice pat to help make good contact between the seed and the dirt. She also planted mounds of squash - both yellow crookneck and zucchini. But she'll tell you they're all "blue" squash - since that was the color of the seeds. 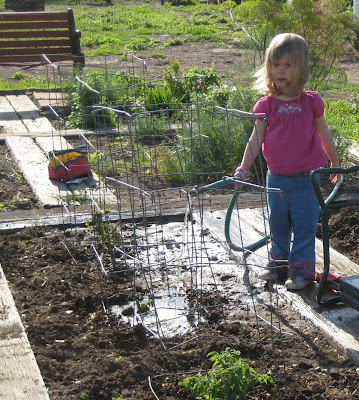 Finally, a nice drink of water for everything in the garden. Once the seeds have sprouted, we'll "mulch" the bare dirt with hay. That'll help keep weed seeds from sprouting and tills nicely into the soil at the end of the growing season.
If you have herbs hanging on from last year, you may want to give them a nice haircut. My basils, tarragon, parsleys, and mints have responded well to heavy trimming. Cilantro is trying to go to seed - and the dill has self-seeded in all the empty garden beds. The dill can stay for a little while longer - just until we're ready to plant the black-eyed peas and okra.
This is the first year that we made enough compost for a generous application in all the vegetable beds! I hope you're composting, too!

Hey Mary Beth,
We both posted about the very same thing today. I really like your little assistant, too. She is a cutie. Isn't it fun to have our little helpers so involved? I'm in awe of the fact that you have asparagus from 2006. I've not planted it before - it is a fall crop I think (not sure about that)but I do love to eat it. Would you say it is easy to grow?

You are well on your way to summer good eating.

If only we could even think about planting at this time of the year. How lucky you are.

I enjoyed reading your tips, even though I'm way out of your zone. What a sweet garden helper you have there, and she did a great job demonstrating gardening for your pictures!

Wow, you are so lucky to have such an adorable little garden assistant! ;)

MEEMS - Asparagus is a long lived plant - we are on the verge of being too warm for it. I think it likes a cool period in which to be dormant. It is loads of fun to grow. Guess I need an asparagus post. That is too funny that we both posted on our veggie gardens and little helpers the same day . . . I was just trying to slide my planting in before March arrived.

CRAFTY GARDENER - Ironically our slow gardening peroid is when it is too HOT. The plants and gardeners wilt together then.

SUE - It is fun to see what people in other zones can grow, isn't it?

PERRENIAL GARDENER - Glad you like my little helper. I can have the worst of days and a visit from her wipes it all away.

It must be so nice to garden with such a sweet, adorable assistant. I am glad to see the next generation being encouraged to garden. That's how I started out.