Even though it is not considered "sustainable", I have to admit I love hearts of palm.   And I've recently realized that us humans aren't the only animals that enjoy munching on this . . . .

Below is the carcas of a Japanese Rhinoceros Beetle. Some people buy them for pets but we were lucky enough to have them just show up in some palms.  In fact, there's even a Japanese Rhinoceros Beetle page on Facebook - which 25 people happen to "like"!    If you are a palm lover, you'll want to watch out for these guys.   Google it to see the 'horn' on the live ones.   It must have fallen off this carcas. 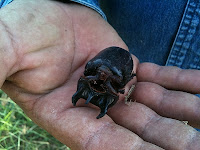 The mature female burrows down beside her selected plant. She leaves quite a large opening as shown in the photo below. Beetle hole is on the bottom left of this palm trunk. 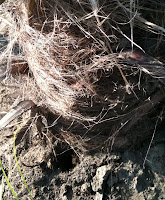 Once underground, the beetle will lay her egg(s). The larva then begins to feed on the roots and up the heart of the palm.   Last year,  Leonard and I lost 5 of our 6 Windmill palms, Trachycarpus fortunii, before we clicked in to what the problem was.

The picture below shows the initial frond damage - by the time your palm is putting out brown fronds, it is probably too late to save it. 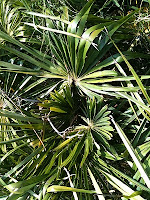 Other palms that the rhinoceros beetle likes to feed on are small Mediterranean Fan Palms, Chamerops humilis, and small Texas Sabals, Sabal texana.   Once they have noticable trunk size, they don't seem to appeal to this beetle.   I would imagine they also enjoy a Florida Sabal or Cabbage Palm.


Most problems with palms can be avoided with good irrigation and fertilization practices. This just happens to be an exception to that rule.
Posted by Mary Beth at 10:52 AM

Oh no, first the agave weevil and now this? I've got two small Med. fan palms. What are the watering and fertilization practices you recommend to avoid problems?

Pam - you did save your whale agave, didn't you? I've haven't had much recreational computer time this past year. . . . About your med fans: they happen to be a desert plant so you don't have to worry much about their irrigation. If the folliage around them is not wilting, they probably have ample water - palms sometimes suffer from a lack of certain micro-nutrients. At home, I use a fertilizer blended specifically for palms - and I usually just fertilize them in the fall. I once had an agronomist tell me that I could push my palms (to grow faster) with second application of nitrogen.

Hi Mary Beth,
That beetle does some bad damage. I'll have to google it to see if we have them here... not sure if I've ever seen one. I can say I hope I don't.

Thanks for stopping by the other day... I know you've been a busy bee.
Meems

I was just at a meeting Wed. where somone was talkinga bout this rhino beetle. Thank you for the good info.

Good info to know. Thank you for clear photos what to look for.